The bison is a North American species whose story stretches from Plains Indian hunters to entrepreneurial industrialists to dedicated conservationists to today's producers and enthusiasts.

Saving the bison from near extinction required a core of concerned individuals that became an international movement of people with conservation ideals, Native Americans, and Great Plains ranchers. Today natural preserves and ranches in all fifty of the United States and all of the Canadian provinces support herds of about 500,000 bison.

An exhibit on the Masters of the Plains

"In my body, in my blood runs the spirit of the buffalo."
-Arvol Looking Horse, Oglala Lakota Sioux, 2000

The exhibit explores the significance of bison in the cultures of Plains Indian peoples--particularly as a resource for food, clothing, shelter and tools. That co-existence changed dramatically with the closing of the frontier that brought new settlers with livestock to compete for grass and water during a time of climate and habitat change. These developments were exacerbated by the commodification of the bison as hide and bone in late nineteenth century industrialization.

The most recent chapter of the bison story is both significant and complex: the romance of rescuing and preserving bison; the science of genetic diversity within the species; the dynamics of poachers, profiteers, and producers both industrial and small-scale; marketing bison fiber and meat to the 21st century customer. The exhibit highlights the role of the National Buffalo Foundation in bringing together a community of stakeholders to celebrate and promote the bison's heritage and to raise awareness of that story.

"I was born in the buffalo trade, I expected to die in it. The buffalo are gone. I do not know what to do."
-Hide trader James Kipp

The exhibit embeds the bison in the larger narrative of human interactions with natural resources that represent an historical awareness of the need for sustainability--a critical theme in our global economic and cultural discussions. By focusing on bison as a shared resource, Bison illuminates the past and present of this great North American mammal as a vibrant part of our future. 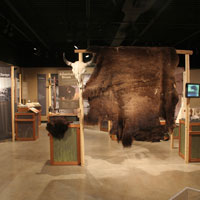 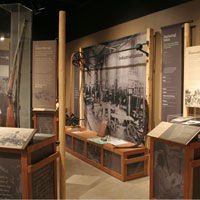 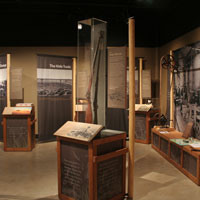 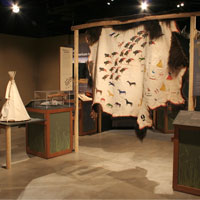 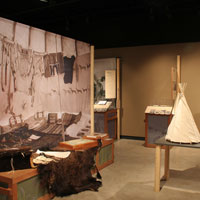 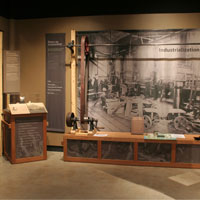 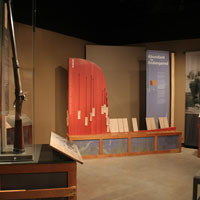 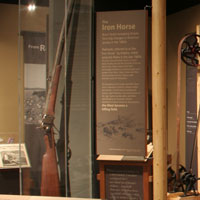 Origins of this exhibit

The Bison traveling exhibit originated as an initiative of the National Endowment for the Humanities (NEH) program called “NEH on the Road.” NEH on the Road was developed by Mid-America Arts Alliance (M-AAA) in Kansas City, Missouri, to extend NEH-funded scholarship by creatively reconfiguring large, high-budget exhibits into smaller, more affordable versions able to travel to small galleries.

NEH on the Road chose The Bison: American Icon, Heart of Plains Indian Culture to be reformatted for its touring program. That exhibition was developed by the C.M. Russell Museum in Great Falls, Montana, as an 8,000 square foot permanent installation that opened in 2008. NEH on the Road staff, led by Leslie Przybylek, worked with the late Anne Morand who had led the Russell's exhibit project, and further customized and expanded exhibit content to meet the needs of a national audience.

In 2009 M-AAA contracted with Flint Hills Design in collaboration with Kauffman Museum (both in North Newton, Kansas) to design and build the traveling exhibit The Bison: American Icon. The smaller exhibit--featuring original artifacts, large graphics, and engaging interactives--was designed to break down and ship in small compact units. NEH on the Road toured The Bison: American Icon for five years, reaching 19 venues across the country before ending its run in March 2015.

A new tour for new audiences

In the spring of 2015, Dick Gehring, representing the board of the National Buffalo Foundation, contacted Chuck Regier at Kauffman Museum about the possibility of acquiring the retired exhibit to further the mission of the National Buffalo Foundation. While borrowed artifacts had been returned to original lenders, NEH on the Road donated all of the exhibit framework, historic reproductions, graphics, and interactives to Kauffman Museum on behalf of the NBF.

The exhibit was displayed at the National Bison Association winter conference in January 2016, and received an overwhelmingly positive response. An exhibit team has been formed with representatives from the NBF, Kauffman Museum and the National Buffalo Museum in Jamestown, North Dakota, to refurbish and expand the exhibit to more fully tell the story of the bison and the bison industry today, and to organize a new tour to reach new audiences.